The 28th Annual Evening of Comedy is coming up at The Barns at Wolf Trap in Vienna. The popular event will feature Greg Morton, Kevin Lee and Ritch Shydner. The evening of comedy will include comic juggling, singing impressions, straight monologue and typical stand-up all blended together.

Tickets are $25 each; shows are Friday at 7 p.m., Saturday at 7 p.m. and Saturday at 9:30 p.m. The Saturday 7 p.m. show is sold out. The venue is located at 1635 Trap Road in Vienna. The bar at The Barns at Wolf Trap serves a variety of appetizers, sandwiches, desserts and a wide variety of beer, wine, and fine spirits starting 90 minutes prior to show time. Check out the menu here. The doors to the performance space open 30 minutes prior to show time. Parking is free.

Ritch Shydner, often described as a “comedian’s comedian,” has his comedy roots in Northern Virginia, where he attended George Mason University School of Law and worked for a congressman. Shydner, a native of Pennsylvania, has has a big career, starring in an HBO special, doing done stand-up on “The Tonight Show” (with both Johnny Carson and Jay Leno), performed on ”The Late Show with David Letterman,” and has had made numerous other TV and film appearances and written for both TV and film.

At the age 16, he combined his love of music with comedy skits to become Greg Morton, That Crazy DJ. A cadre of costumed characters and animated antics coaxed people onto the dance floor and became his signature style. A style dubbed by Las Vegas Magazine as “completely entertaining.” This former mobile disc jockey who used to play songs at weddings, now sings song parodies on nationally syndicated radio shows, like the Bob and Tom Show. Take his Obama Man, sung to the tune of Candy Man which has racked up more than 4 million hits on YouTube. Since then, this three-time veteran of the Just For Laughs Festival, has gone on to disarm audiences worldwide, including concerts like Luther Vandross and Celine Dion.

If ever there was a comedian/ magician to be seen, it is Kevin Lee. Lee’s unique combination of comedy, magic and juggling leaves audiences both in awe and in stitches, his Web site notes. Lee has appeared on “Showtime at the Apollo,” HBO’s “Def Comedy Jam” and Jamie Foxx’s “Uptown Comedy Club” to name a few. Lee was also voted “Washington DC’s Funniest Comedian” by Washingtonian Magazine.

This evening of comedy will include comic juggling, singing impressions, straight monologue and typical stand-up all blended together.

Coming up on Friday, May 8th is “A Night of Comedy” featuring the amazingly talented Greg Morton! The show is sure to be a wild ride with a mixture of vocal impressions, improv, stand-up, singing and dancing, and so much more! Tickets can be purchased in advance for $22.50 or at the door on the night of the event for $28. 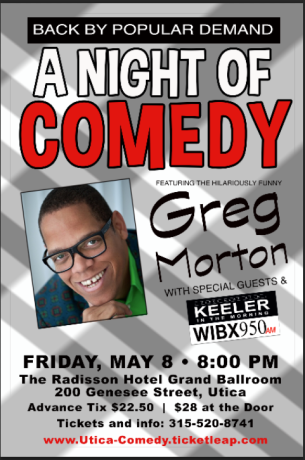 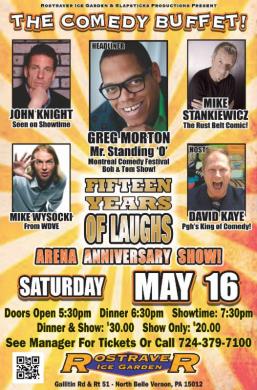 The never predictable and always entertaining, Greg Morton will be returning to the Oklahoma City Loony Bin.  If you haven’t seen him, you owe yourself a treat.  Greg’s show is a mixture of, stand-up comedy, improvisation, impressions, song parody, and a little ventriloquism thrown in!  Morton, who has been very busy these past few years with cross country theatre tours, Vegas shows, and a special appearance on Comics Unleashed, with Byron Allen. Loony Bin regulars may remember Greg for his two minute Star Wars impression, and his show stopping finale. THIS SHOW IS A MUST SEE FOR ALL LOONY BIN PATRONS!