Solid line up! Solid show! Click it for tickets!

This Friday, Greg Morton will appear on WJXT 4 JAX in a special appearance, to promote his live shows at THE COMEDY ZONE, in Jacksonville, FL. Secrets will be revealed, and questions will be answered, like… “Did he play for the Buffalo Bills?” Tune in Friday, 10:30 am.

Sam Hadding is a recent high school graduate who has autism.  This presented challenges in his life, but it never swayed him from his dreams of becoming a cartoonist/animator.  After placing in the top 10, of a film contest hosted by Ghetto Film School, he went on to complete two collaborations with YouTube channel, The Positive Autism.

Sam is also a huge fan of America’s Got Talent.  Inspired by the vocal talents of AGT alumni, he has completed two more collaborations.  The first is a beautifully animated version of “Dear Father,” sung by season 11 finalist, Laura Bretan. The second film is with semi-finalist Greg Morton, who appeared on season 14, as an impressionist.

He reached out to Greg a month ago, and after several email exchanges, found they were huge fans of slapstick humor. Sam quickly went to work, re-creating Greg Morton’s AGT audition, in this hilarious 2 minute, animated short!

Sam is currently working on many other collaborations, including a short film that he wrote, animated, cast and directed himself, called… ???

Next stop on Greg’s non-stop tour of the country is the Des Moines, IA Funny Bone!  If you saw him on AGT, you have 5 chances to see him live!    BUY TICKETS NOW!

The All Ages, Family Show, is growing in popularity.  Two weeks ago in Omaha, we set a record with 248 tickets sold!  So leave the sitter at home and bring the kids.  GET YOUR TICKETS NOW FOR THE ALL AGES FAMILY SHOW

HEY OMAHA!  Greg Morton returns to the Omaha Funny Bone, off his successful run on season 14 of America’s Got Talent.  But he won’t be just doing funny voices.  Greg has the most diversely entertaining show on the circuit.  With 35 years in the business, and numerous credits, Greg Morton brings his one man variety show to the Funny Bone.

You watched AGT with your kids and they’re huge fans, but there is an age restriction at the club.  You’re not a fan of coarse language or sexual content, but you’ve heard Greg has a Dry Bar Special.  HAVE WE GOT A SHOW FOR YOU!   FEB. 23, A SPECIAL ALL AGES SHOW HAS BEEN ADDED!  He will be performing material from that Dry Bar Special, plus highlights from his appearance on AGT.  It’s a show, everyone can enjoy!

BUY TICKETS NOW! for the KIDS SHOW.  It’s open to all ages!  We’ve sold over a hundred advance tickets.

Hey!  If you live in the Seattle/Tacoma, Washington area, or you know someone who lives in the area, please pass this along.  Comedian/Entertainer Greg Morton will be appearing at a special show at the Tacoma Comedy Club, located at 933 Market St. Tacoma, WA.  Greg’s credits include, AGT, Dry Bar Comedy, Just for Laughs, Comedy Central, Comics Unleashed, and a host of voice overs of your favourite Saturday Morning Cartoons. 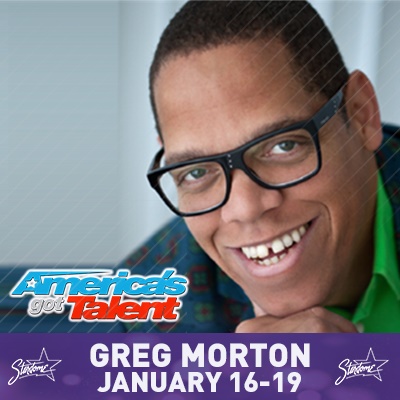